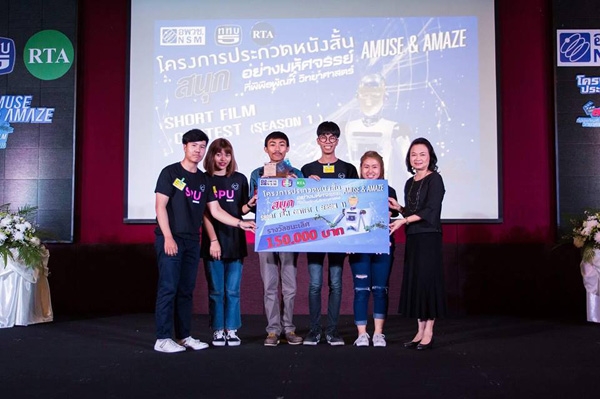 The 2nd year students of School of Communication Arts majoring in Film and Digital Media won the first prize from the Short Science Firm Contest “Amuse & Amaze Short Film Contest (season1)”. This contest was organized by National Science Museum, and the awarding ceremony was organized on 2 June 2017 with the cooperation from RTA Entertainment Public Co.,Ltd. and Channel 5 TV Station. The contest aimed to encourage young people to present their creativity and reflection of their perspective on Science through short film. A total of 40 teams from various institutions in Thailand were selected to receive the funding for their film production, producing the 8 minute film showing the importance of science for the youth. Sripatum University is proud of “Art Gallery” team from the School of Communication Arts who won the first prize in this contest with their film entitled “Inspiration”. Under the advisement of Head of Film and Digital Media department – Mr. Theerapan Chanapan and a Lecturer – Mr. Kittipong Jinawong, School of Communication Arts, SPU team as the champion received the award with scholarship of THB 150,000. Congratulations!